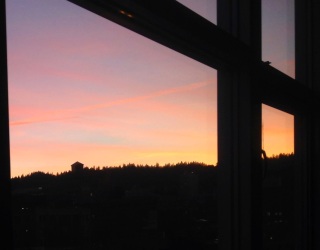 This is the first of two meditations I gave tonight at our Maundy Thursday service.

Mark 14:53-65 – They took Jesus to the high priest; and all the chief priests, the elders, and the scribes were assembled. Peter had followed him at a distance, right into the courtyard of the high priest; and he was sitting with the guards, warming himself at the fire. Now the chief priests and the whole council were looking for testimony against Jesus to put him to death; but they found none. For many gave false testimony against him, and their testimony did not agree. Some stood up and gave false testimony against him, saying, “We heard him say, ‘I will destroy this temple that is made with hands, and in three days I will build another, not made with hands.’” But even on this point their testimony did not agree. Then the high priest stood up before them and asked Jesus, “Have you no answer? What is it that they testify against you?” But he was silent and did not answer. Again the high priest asked him, “Are you the Messiah, the Son of the Blessed One?” Jesus said, “I am; and you will see the Son of Man seated at the right hand of the Power,’ and ‘coming with the clouds of heaven.’” Then the high priest tore his clothes and said, “Why do we still need witnesses? You have heard his blasphemy! What is your decision?” All of them condemned him as deserving death. Some began to spit on him, to blindfold him, and to strike him, saying to him, “Prophesy!” The guards also took him over and beat him.

Were you there when people with power were looking for any way to get rid of Jesus and silence is his teaching, healing, and hospitality? They were so desperate to kill him that they brought forward many witnesses with contradicting statements and false testimony.

In the end, Jesus’ own identity convicted him. He acknowledged that he was the Messiah, and was condemned to death. He was sentenced to death for being a threat to the status quo, and threatening the power structures of oppression. Were you there?

Were you there in 2015 when black men were labeled thugs and terrorists to justify violence against them by the police and vigilantes, when unarmed Latinos were shot because of a falsely perceived threat? Were you there when their very existence as people of color made them scapegoats within a system of institutionalized racism and oppression?

Where have we been complicit in our silence and false testimony in a country where black men are confronted by the police, profiled, presumed guilty of a crime, and suffer violence, often to the point of death. We live in a country where people of color are far more likely to be pulled over and frisked, given longer jail sentences for the same crimes, and where the color of the skin impacts housing, educational opportunities, lending practices and economic stability. In 2015, racism is still alive and thriving, sometimes hiding just under a polite veneer, but more and more it is making a loud noise amidst the animosity of a distracted, divided country.

Perhaps we have been like Peter, sitting near the guards so we can see what is happening, worried, and scared, but silent?

Were you silent when the national conversation on race got lost in the buzz about the latest media sensation? Were you silent in the presence of racist jokes? Did you cross to the other side of the street, or make an assumption about economic means or criminal intent when you saw a man ahead of you, merely because of the color of his skin?

Where have we seen in ourselves these pieces of racism and been ashamed or horrified? Where have we not even noticed when we treat people differently?

Racism is not an all-or-nothing sin, where bad people are racist, and good people are not. Jay Smooth suggests that instead of thinking of racism as something that can be removed once, like an appendix, our anti-racist work must be done daily, like brushing our teeth. Each day, we must remember our baptism. We start anew with grace, but also with searching and repentance, drowning our sins, including the sins of racism. Then we rise again in newness to live out the good news of this Jesus who stands on trial for speaking truth and love.

Jesus tells the authorities that he will be seated at the right hand of the Power. But in the passion he does not comes into power the way we expect, but in love and weakness. He was spit on, blindfolded, taunted and beaten. Can you not see that scene played out today as one of the frequent assaults on people of color?

Jesus stayed in that moment of the trial out of love for us in our wounded places, as well as in our sinful places. Jesus is present with those who are condemned by silence and lies, and by their very existence. God is present in Jesus with those who are marginalized and oppressed by cultural and political systems. Jesus is with them in their suffering and with their protest.