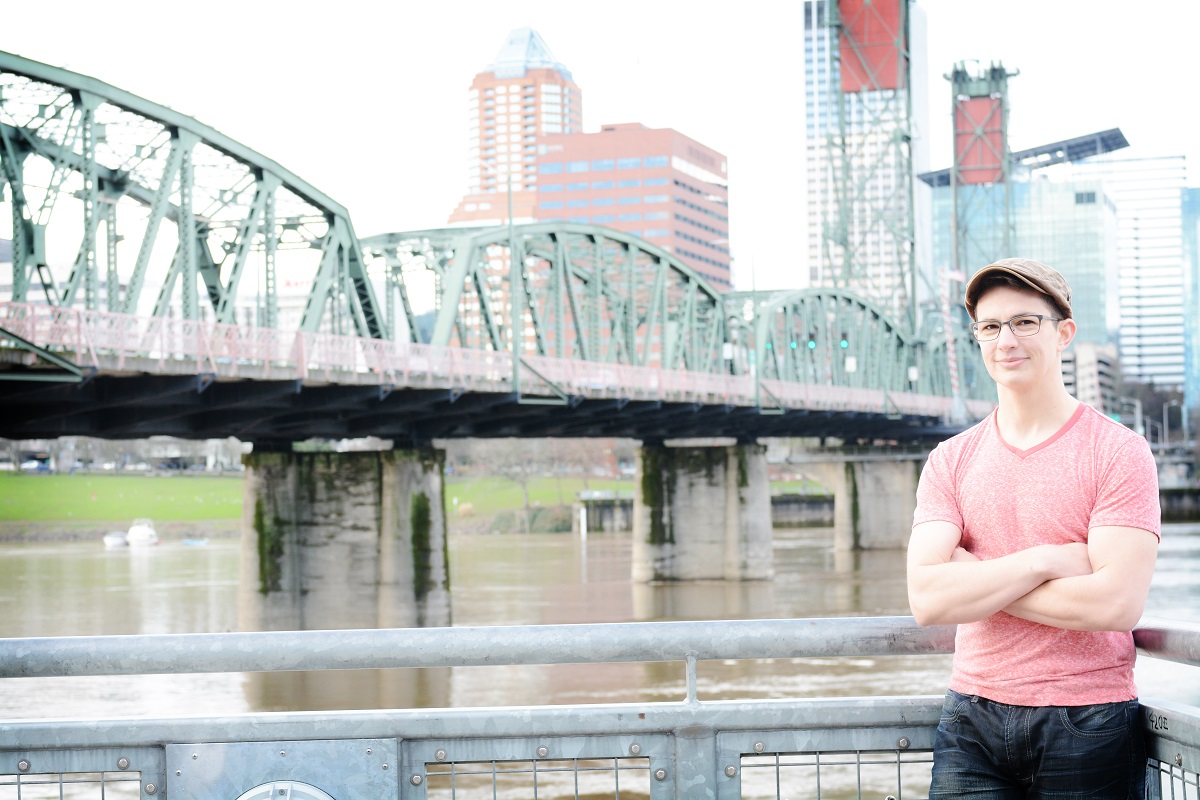 This article was first published in PQ Monthly, Portland, in February 2016.

It’s raining outside. I’m scrolling through Facebook past angry political posts and memes about cats. And then I see a post from AIDS Walk Portland. Drawn in, I look at the photos from last summer. Blue sky and sunshine on the green grass of The Fields Park, smiling friendly faces, pictures that bring back happy memories and joy. My mind starts jumping ahead to this summer, and ideas bubble up for making 2016 even better.
I volunteer for Cascade AIDS Project because I believe in the mission: to prevent HIV infections, support and empower people living with or affected by HIV, and eliminate HIV-related stigma and health disparities. I also want to make a difference because of the people I care about who are affected by HIV.

But how do I describe the greater gift that the community has given me?
In 2010, I was mad a God for suffering in the world, and mad at the church for the human failings of its leaders. Upset about my poor choices in love, and my loss of faith, I was struggling with depression and felt adrift. I had moved back home to Beaverton, after dropping out of seminary. I was lonely, tired of taking myself to dinner alone, and I was just plain feeling blue. I didn’t yet know I am trans.

My friend from seminary asked me if I would join her team in the AIDS LifeCycle, a 545 mile from San Francisco to LA. I wasn’t a cyclist, but thought I would give it a try, hoping it would be a way I could get fit. Because I live in Portland, I was connected with the training captains and teams from this area.

Team Portland for the AIDS LifeCycle is very committed, and I tried to train hard. We got up early on Saturdays and spent the whole day on the bicycle, going up steep hills, learning to ride in the wind and the rain, learning to follow good cycling etiquette. We shared the stories of how our lives were impacted by HIV.

Truthfully, I was still a bit of a lost soul on those rides. I am especially grateful to David Duncan and Maje Anderson, great cyclists and extraordinary men who shepherded me along my steep learning curve, fear of falling and other anxieties, as well as my general struggles. They never left me behind. They helped me face the scariest downhills. The rest of the team is also awesome but some of my strongest memories are of those times when I couldn’t keep up, but David and Maje stuck with me.

The actual event in the summer of 2011 was amazing, with 2500 cyclists and roadies over 7 days. Again, I felt out of my element, and overwhelmed by several challenges (for me one of the hardest was waking up, packing all my gear, and getting on the bike without my usual slow morning dawdle). I was moved deeply, however, by the way people encouraged and supported one another. This was also a time when I most strongly identified as “one of the guys”, and tried to figure out what that was about.

Flash forward to 2012, and David and Maje invited me to ride a shorter ride, this time for the local organization, Cascade AIDS Project. I did some training on the bicycle, but more importantly, became involved in the local community. I met so many new friends who changed my life forever, and found meaning and purpose in working to end AIDS and fight stigma.

It’s amazing how just a few choices can change the direction of your life. I raised money, fought stigma, and promoted education to make a difference in the lives of those affected by HIV. But what I have received far outweighs anything I have given.

It was a journey for me to come from the place of sorrow in 2010, to the place of joy I am now. It took time to rebuild my faith, and find community. It took a village to help me come out as trans.

I find so much inspiration and courage from those who choose to be public about their HIV status, such as the Positive Pedalers from AIDS LifeCycle, whose motto is Eliminating Stigma through Our Positive Public Example, and Cascade AIDS Project’s group Positive Force NW, who seek to build community and eliminate HIV/AIDS-related stigma. I have tried to craft my own life motto, “no shame, no fear, no stigma” based on these role models. They have given me the bravery to live my own most authentic life, loved and cared for me, and helped me find community as my true self. I saw God at our AIDS Walk.

For Valentine’s Day this year, I give my love and gratitude to all who walk, all who donate, all who volunteer, and to all who don’t let stigma or fear hold them back. For those who are struggling, you are in my heart.
I look forward to a day when HIV is no more, but until then, I am grateful for an opportunity to walk alongside those affected by HIV. I can’t wait organize our faith communities again this year for AIDS Walk Portland, on September 10th, 2016. You can sign up now! Start or join a team at AIDSWalkPortland.org!

Thank you all for being a part of my story, and in my life.